Sex and the Cycle of Addiction

Addiction is characterized by an easily recognizable cycle. Essentially, the cycle is: being triggered (feeling emotional or physical discomfort); thinking about using as a way to ease the discomfort; preparing to use; actually using; pretending that using was OK (engaging in denial); and then feeling bad about using. The last stage, feeling bad, is the same as the first stage. In this way the cycle of addiction is self-perpetuating. This is true with all forms of addiction, whether they involve substance abuse or a compulsive behavior. 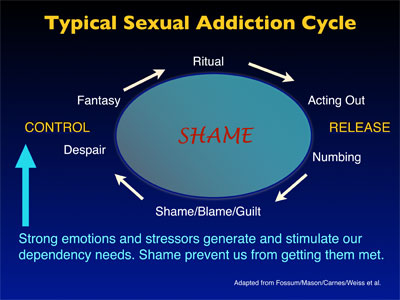 The sex addiction cycle is most easily interrupted when the addict recognizes that he or she is being triggered. At this point it is possible to see the potential problem and to implement a healthier, non-addictive coping mechanism. In this way the onset of sexual fantasy is avoided, as are the remaining stages of the cycle. It is possible to stop the sex addiction cycle even if it has progressed into fantasy and even during the early portions of ritualization, but doing so becomes progressively more difficult. And once an addict enters “the trance,” the addiction is in full swing and nothing less than significant outside intervention (being discovered by a spouse or a boss, getting arrested, etc.) will stop it.