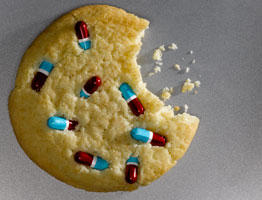 With cross-addiction, addicts switch from one problematic substance/behavior to another. If they can’t use one substance/activity to escape and dissociate from life, they’ll use another. For instance, Marie is an active alcoholic who occasionally feels bad about her drinking and sobers up. But any time she stops drinking, she binge eats, numbing out with food instead of her usual alcohol. Later, when she goes back to drinking, her food consumption returns to normal.

With co-occurring addiction, addicts utilize multiple addictions simultaneously. For instance, Jason drinks alcoholically, uses cocaine, and gambles at the local casino. Most nights he tells himself he’s only going to have a beer or two at home, but before he knows it, he’s coked up and sitting at the blackjack table, with the nearest cocktail server on high alert. Nearly always, if he’s doing one of his addictive behaviors, he’s doing all three.

Note: Most often the term “co-occurring” is used to describe a primary mental health issue coupled with a secondary mental health issue. Sometimes that second issue is an addiction – depression coupled with drug addiction, for instance. However, addiction need not be present in co-occurring diagnoses. A person may have an attachment deficit disorder coupled with PTSD, for example. (This used to be called “dual diagnosis.”) It should be noted that a person with an attachment deficit disorder coupled with PTSD is severely at risk for addiction, too.

Cross- and co-occurring addictions are especially common among men and women who act out sexually. In one early survey of male sex addicts, 87 percent reported regularly abusing either an addictive substance or another addictive behavior. Male sex addicts often pair sexual activity with stimulant drugs like cocaine and methamphetamine (plus erection-enhancing prescription medications like Viagra, Cialis, and Levitra). There is no similar research for female sex addicts – in fact, there is a dearth of research on female sexual addiction in general – but I can assure you that women sex addicts do frequently present in treatment settings with cross- and/or co-occurring issues. Often they pair their sexual acting out with an eating disorder, but they may also pair it with alcohol or drugs, including meth and cocaine.

Stimulant drugs are popular with sex addicts of both genders because these substances cause feelings of euphoria, intensity, and power, along with the drive to obsessively do whatever activity the user wishes to engage in – including sex. In fact, users say stimulant drugs allow them to be sexual for hours or even days on end. Typically, meth is the preferred “party favor” for casual/anonymous Internet and smartphone hookups. If a person’s profile says he or she is looking for “PNP” (party and play) that nearly always means that he or she want to do meth (or coke) in conjunction with sex. Nevertheless, not all cross- and co-addicted sex addicts like “speed” drugs. Many prefer alcohol, marijuana, benzodiazepines, and/or other substances (or even the rush of another addictive behavior, such as gambling). Sadly, the intoxication and disinhibition evoked by addictive substances leaves sex addicts highly vulnerable to STDs, sexual violence, unwanted pregnancy, and other sex-related issues.

Ultimately cross and co-occurring addictions are all driven by the same thing. In short, addicts of all types are seeking emotional control – the ability to reliably escape and dissociate from emotional discomfort and the pain of underlying psychological conditions (depression, anxiety, unresolved early-life trauma, deep shame, etc.) So whatever the addiction – drugs, alcohol, gambling, sex, eating, spending, or anything else – the motivation is the same. The addict wants to control and/or avoidthe feelings and emotions evoked by real life. And addictive substances and behaviors readily and reliably oblige by altering brain chemistry in ways that temporarily distract from life stressors, uncomfortable emotions, and the turmoil of psychological disorders. In other words, substance abusers and behavioral addicts alike engage in their addictions not to feel good, but to achieve a sensation of disconnection and numbness.

And, ultimately, the threefold result is always the same:

As therapists, if we see or suspect that a client has an issue with addiction, then it is time to not only address that potential issue, but to screen for all other potential addictions. The simple truth is that if all of an addicted client’s addictive behaviors are not addressed, he or she cannot properly grow and progress in therapy. In other words, if you’re treating an alcoholic who’s stopped drinking, that’s great. But if he’s hitting the casino every night and achieving the same exact sense of escape and dissociation, then he’s not making progress, and the other issues he’s dealing with – impulsivity, relationship issues, trouble at work or in school, and the like – are unlikely to go away.

If you find that a client is cross- or co-addicted, usually the first priority is getting his or her substance abuse under control. Until substance use is curtailed, that individual will likely find it very hard to stick to the rules of behavioral sobriety. After all, as mentioned above, addictive substances are disinhibiting, and the best of intentions often fall by the wayside after a few drinks, a bump of meth, a couple of puffs off a joint, etc.

It is also important to note that many people simply cannot tolerate day-to-day life without abusing either a substance or a behavior as a means of escape. These individuals will automatically turn to smoking, drinking, drugging, gambling, video gaming, spending, sex, or whatever else it is that gets them out of their heads and prevents them from feeling. They can jump from one cross-addictive behavior to another, and then another, and another, ad infinitum. Usually this is the result of profound, unresolved, early-life trauma. Often these individuals require a period of highly structured inpatient (residential) treatment for their addictive issues, perhaps followed by many months of intensive, addiction-focused outpatient therapy. Eventually, once their addictive behaviors (all of them!) are under control and they’ve developed healthier coping mechanisms, they can fully address their underlying issues.

Robert Weiss LCSW, CSAT-S is Senior Vice President of Clinical Development with Elements Behavioral Health. He has developed clinical programs for The Ranch outside Nashville, Tennessee, Promises Treatment Centers in Malibu, and The Sexual Recovery Institute in Los Angeles.He has also provided clinical multi-addiction training and behavioral health program development for the US military and treatment centers throughout the United States, Europe, and Asia. For more information you can visit his website, www.robertweissmsw.com.