A True Story of FTM Transgenderism – ‘Second Son: Transitioning Toward My Destiny, Love and Life’ by Ryan K. Sallans

I don’t often utilize this space for book reviews. In fact, I don’t often write book reviews. But after I heard trans man (female to male transsexual) Ryan Sallans speak about his life and what it means to be transgender at the 2015 annual symposium of the International Institute of Trauma & Addiction Professionals, I ordered a copy of his book, which I read in a single sitting. Then, given the tremendous confusion about transgender issues – not just among lay people but in the clinical community – I felt that I should step up and recommend this book to any clinician who is treating an individual who may be transgender. 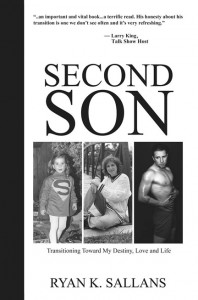 he book, titled Second Son: Transitioning Toward My Destiny, Love and Life, chronicles the story of Ryan Sallans, once known as Kimberly Sallans, beginning with his early childhood as a “tomboy.” (I will refer to Ryan using male pronouns even when discussing events prior to his physical transition, because emotionally and psychologically he was male from birth onward.) Ryan begins the book by telling us how, living as Kim, he hated having long hair and wearing dresses, and that he eventually tricked the local hairstylist into giving him a boy’s haircut. He also tells us that his parents made him wear a dress on the first day of school every year – probably to make sure his teachers and classmates knew that despite his boyish appearance and actions, he was indeed a girl (in their minds, anyway).

As with most transgender people, Ryan’s adolescence was nightmarish. His teens and early twenties were peppered with body issues, an eating disorder (anorexia), alcohol abuse, social isolation, and desperate attempts to fit in and “be normal.” In his early twenties, Ryan, still living as Kim, came out as a butch lesbian, entering into a long-term relationship with a woman named Michelle. Not long after beginning his relationship with Michelle, he began to fully understand that he was transgender and that there was actually something he could do about that fact – provided he had the courage to move ahead with his feelings. To be honest, the moment in the book when Ryan finally tells his therapist that he is male is incredibly powerful, and it left me in tears. (Like a good therapist I had empathized with him from the start, and the catharsis I felt when he finally said, “I think I am a boy,” was very, very real.)

That, of course, is just the first half of the story. In the second half of the book, Ryan writes about his journey from physical female to physical male, beginning with hormones and “top surgery” and ending with his “lower surgery.” To me, the surgeries themselves are not overly interesting, and perhaps they aren’t to Ryan either, because he spends relatively little time discussing the specifics. Instead, he talks much more about the psychological and relationship issues involved – and from a psychotherapeutic perspective this is both fascinating and enlightening.

The most notable issues Ryan faced both during and after his transition are as follows:

Although the book focuses primarily on Ryan’s personal story, there are moments when the general societal confusion about transgenderism takes center stage. For instance, when Ryan went on Larry King Live he was asked by the hunch-shouldered Larry, “When will you be complete?” The well-intentioned Mr. King just didn’t quite get it.

The lesson to be learned, of course, is that with or without a physical transition, Ryan was always male, because what is in the mind and the heart is far more important than what is dangling (or not) between a person’s thighs. Transgender people are who they are, regardless of whether they eventually have the surgeries that make their outsides match the inside. Some people, like Ryan, have the emotional and financial wherewithal to make that happen; others do not, but that does not make them any less manly or any less complete.

After reading Second Son, I can’t help but wonder what Ryan’s life would have been like if his parents and other significant attachment figures had recognized and accepted his male identity early in life. Could he have avoided his body dysmorphia, his anorexia, his depression, and the other emotional and psychological tribulations he endured? Maybe, maybe not. Ultimately what is most important is that he was strong enough to recognize his true gender, and to act on that in ways that made his life better – eventually winning the support of his family in this endeavor. And because of that, Ryan is now a well-adjusted man with a healthy long-term romantic relationship, open lines of communication with his family, and a strong social support network.

Robert Weiss LCSW, CSAT-S is Senior Vice President of Clinical Development with Elements Behavioral Health. A licensed UCLA MSW graduate and personal trainee of Dr. Patrick Carnes, he founded The Sexual Recovery Institute in Los Angeles in 1995. He is author of Cruise Control: Understanding Sex Addiction in Gay Men and Sex Addiction 101: A Basic Guide to Healing from Sex, Porn, and Love Addiction, and co-author with Dr. Jennifer Schneider of both Closer Together, Further Apart: The Effect of Technology and the Internet on Parenting, Work, and Relationships and Always Turned On: Sex Addiction in the Digital Age. He has developed clinical programs for The Ranch in Nunnelly, Tennessee, Promises Treatment Centers in Malibu, and the aforementioned Sexual Recovery Institute in Los Angeles. He has also provided clinical multi-addiction training and behavioral health program development for the US military and numerous other treatment centers throughout the United States, Europe and Asia. For more information you can visit his website, www.robertweissmsw.com or his blog on Addiction.com.