The Neurobiology of (Sexual) Addiction 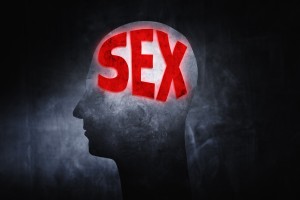 Addiction and the Brain

Addiction is sometimes referred to as a “brain disease,” primarily because it is the brain’s neurochemical pleasure response that drives it. Put simply, addictive substances and behaviors trigger the release of various pleasure-inducing neurotransmitters – primarily dopamine but also adrenaline, oxytocin, serotonin, and a variety of endorphins – into the nucleus accumbens (colloquially referred to as the brain’s rewards center). This neurochemical response causes feelings of pleasure, excitement, control, and, most importantly from the standpoint of addiction, distraction. Essentially, some people learn over time that an easy way to avoid feelings of discomfort is to “numb out” by ingesting an addictive substance or engaging in an addictive behavior. Eventually, this usage can rise to the level of addiction, where distraction (escape from emotional distress) rather than pleasure is the motivating factor.

Interestingly, this addictive neurochemical response is a perfectly normal and even necessary part of life. For instance, in a typical, healthy, non-addicted person the brain’s rewards center registers pleasure in response to naturally occurring life-affirming experiences – eating, achieving, helping others, being sexual, etc. These behaviors are rewarded with feelings of pleasure because they ensure survival of both the individual and the species. Upon experiencing pleasure, the rewards center notifies other portions of the brain that this has occurred, most notably the centers involved with mood, memory, and decision making. In this way, humans learn which activities are pleasurable, and they make future decisions based on this information, thus ensuring their survival. This is intelligent design at its finest.

Unfortunately, the rewards center can be manipulated. For instance, alcohol, addictive drugs, and compulsive patterns of intensely stimulating behaviors (sex, romance, gambling, spending, video gaming, etc.) can be used to artificially stimulate brain’s reward system, flooding it with unusually high levels of dopamine – anywhere from two to ten times the amount provided by normal pleasurable activity. That’s a pretty big blast of pleasure juice! And, as is the case with all typically pleasurable experiences, this enjoyment-related information is transmitted to areas of the brain dealing with mood, memory, and decision making. So is it any wonder that we sometimes want more, more, and still more?

Further complicating matters is the fact that the human brain is built to adapt to the input it receives. For instance, as addictive inputs are continually received (through repetitive drug use, gambling, sex, or whatever), the brain adjusts to excessive dopamine levels by producing less dopamine and/or by eliminating dopamine receptors. (Dopamine is experienced as pleasure when it “plugs in” to a dopamine receptor.) In other words, the brain is conditioned to expect artificially high amounts of dopamine, and it adjusts in ways that reduce the impact thereof.

Nevertheless, other parts of the brain (mood, memory, decision making) still remember the abnormally high levels of pleasure once derived from addictive stimuli, and those portions of the brain continue to encourage use. In this way, liking an addictive substance or behavior transforms into wanting/needing an addictive substance or behavior, and compulsion takes over. So even though the addictive stimulus (drugs, alcohol, sex, romance, gambling, or whatever) no longer provides the level of pleasure it once caused, addicts want/need to continue using.

Sometimes people can understand the manipulation of neurochemistry via addictive substances, but they struggle to wrap their heads around a behavioral addiction such as sex. Don’t you need to ingest a drug to affect the brain? In such cases, it sometimes it helps to think about Joe, a cocaine addict on payday, described below:

After receiving his paycheck, Joe runs to the bank to exchange it for cash, skipping out of work half an hour early to do so, even though he’s been warned repeatedly that this behavior may get him fired. Then he dashes off to his dealer’s house to spend money that he really ought to set aside for food, rent, and the care of his family. As he approaches his dealer’s house, his heart races, he’s sweating, and he is so obsessed and preoccupied with using that he doesn’t even notice the police car parked a block away. Joe is so completely focused on cocaine that the day-to-day world, with all of its problems and obligations, has temporarily receded. In most respects he is already high. He has escaped from his life, his decision-making is distorted, and he has lost touch with reality. It doesn’t matter that there is no actual cocaine in his system because his brain is pumping out dopamine as if there is.

This neurobiological state of distraction and emotional escape, no matter how it is induced, is the goal with all addictions, both substance and behavioral. And the brain response is the same either way. For example, in one recent study scientists found that when sex addicts are shown pornography their brains activate in three primary areas – the amygdala, the dorsal anterior cingulate, and the ventral striatum (regions of the brain in charge of, among other things, mood, memory, and decision-making) – while the brains of non-sex addicts do not. The research team also noted that this activation closely mirrors the brain activity of drug addicts when they are exposed to drug-related stimuli. So we see very clearly that there are significant differences in the brain response manifested by sex addicts versus non-sex addicts, and tremendous similarities in the brain response manifested by sex addicts and drug addicts. Sex addicts and drug addicts experience the exact same self-generated anticipatory high.

In this way we see that the neurochemistry of sexual addiction very definitely mirrors the neurochemistry of other addictions. We also see that addictions of all types, including sexual addiction, are about the manipulation of neurochemistry, and that this manipulation can happen with or without an addictive substance. Sex addicts in particular “get high” based more on fantasies and ritualistic preparations than anything else. In fact, they typically experience more pleasure and escape through anticipating, chasing, and preparing for sex than from the sex act itself. They even have a name for this condition, referring to it as either the bubble or the trance.

The simple truth of the matter is that sex addiction is not about the sex any more than substance addictions are about alcohol and drugs. Instead, addictions of all types are about losing touch with and escaping from reality for an extended period. For sex addicts, engaging in sex and reaching orgasm – what most non-sex addicts think of as the whole point sexual addiction – actually ends the high, throwing the addict back into the real world, where he or she must once again face life and all its problems. As such, sex addicts often postpone this event for many hours or even days, preferring instead the extended, escapist, anticipatory high of the bubble/trance.

Robert Weiss LCSW, CSAT-S is Senior Vice President of Clinical Development with Elements Behavioral Health. He has developed clinical programs for The Ranch outside Nashville, Tennessee, Promises Treatment Centers in Malibu and numerous other facilities. A licensed UCLA MSW graduate and personal trainee of Dr. Patrick Carnes, he is author of Cruise Control: Understanding Sex Addiction in Gay Men and coauthor with Dr. Jennifer Schneider of both Always Turned On: Sex Addiction in the Digital Age and Closer Together, among other books. For more information you can visit his website, www.robertweissmsw.com.