Psychologist in private practice in Albany, Saranac Lake, New York, is noted for her work in child welfare, mental health, and substance abuse. She has served as a consultant to organizations in preventative and clinical strategic planning. Dr. O’Gorman is a cofounder of the National Association for Children of Alcoholics, and has held positions ranging from clinical director of child welfare agency to interim director of a crime victims organization to director of prevention for NIAAA.

One billion? and we’re not talking about the Sequestration, which is planning to cut one trillion anyway, or the population of the US that is only about 315 million.  No, we are speaking about a global effort involving more than three times the population of the US — we are speaking about women uniting around the world to end violence against women and girls, and doing this in a distinctly female way – by dancing, walking out, rising up, even giving voice to our concerns by demanding, that the violence, END.  By drawing attention to our concerns, by using the skills we have, and even perhaps having some fun in the process. Why? Because, right now, 1 in 3 women on the planet will be beaten or raped during her lifetime, about one billion women, and that number includes some of you reading this blog. 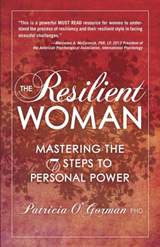 Sometimes when something is so very common is feels even normal.  We have what I call our girly thoughts to thank for this, those societally driven messages concerning how we are to blame for all the misfortune we experience, and we are often not even aware that we are listening to them.
Girly thoughts are not new, and we come by them honestly. After all in the Bible, isn’t there a prayer to God, thanking HIM, for not being born a woman?  This example, and many, many others have resulted in many women being seen as less-than and as a consequence, acceptable targets for needing to be controlled, and for the rage of men.  And due to their girly thoughts many women even believe it was their fault.

But this doesn’t stop women from being courageous—you know what that is—acting in the face of fear, courage is not the absence of fear but taking action when you are, well, afraid.  On a daily basis we have all seen that being a woman can be very dangerous, particularly if the woman believes she has rights. But that hasn’t stopped so very many of us.   A woman could be shot in the head is she wants to go to school, have her clitoris removed, be targeted by a commanding officer, be slipped a drug so she is unable to fight off an attacker, or beaten by a drunk father or boyfriend who says he loves her.

So it probably sounds incredible to believe that we can make a difference by dancing.  How unreasonable is that, you may be wondering?  You may be asking where are the guns, the armies, the rockets – the real power?  After all isn’t that how we all been shown to demonstrate our power, through muscle, through clubs, through armaments, not to mention tradition and laws?  Well, that is how many show their power.  That is how we have been trained to understand power, as: might, intimidation, force.  But as for the real power, the answer is clear.  The real power is within each of us. This is the message of our recovery programs, the message our mothers wanted or perhaps did send us, and it is the message in this worldwide effort–onebillionrising.  We can begin to own our power, by uniting with other women, and men, in ONEBILLIONRISING/ is a global call to women and men across the planet to gather in their communities to dance and demand an end to the violence girls and women face, no matter what the cause.

What can you do?  First check out http://onebillionrising.org/— then dare to use your personal power to consider creating your own event in your school, office, block, town. Plan to make it meaningful and perhaps even fun.  Break out of your comfort zone and even think about making an outrageous statement that is so engaging that others will want to dance with you, with all of us, enjoying the power of community, and the end to violence.  Realize that whether you are a woman in recovery, an ACoA, a sexual abuse survivor, you are connected to all other women who have experienced similar pain, trauma, discrimination, today, and in the past.  But understand that together we can all join to reduce, and even eliminate, the violence of the future, all through the improbable action of dancing together.