Women in Sports Really Can’t Afford to Think Girly Thoughts, So Why Do You? 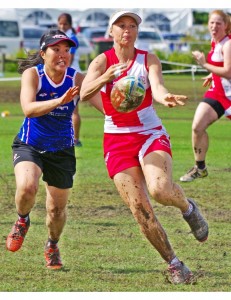 Women in sports take a great deal of abuse, and most of it is off the field.

Professional women athletes are criticized in both public and social media for being competent, for being aggressive, and for winning.

Consider the sexist remarks made before the women’s final of the BNP Paribas Open. Indian Wells CEO Raymond Moore opined at a press conference that “both the Women’s Tennis Association and its players ride on the coattails of men” and that they “should go down every night on their knees and thank God Roger Federer and Rafa Nadal were born.”

Negative, Disparaging Attitudes Led to THIS

Not only do professional women athletes receive less media, but what they do receive is often negative. Take the case of the World Cup Championship U.S. Women’s National (Soccer) Team.

ESPN reported that “The USWNT’s victory in the World Cup final last summer not only beat the title-clinching game of the NBA Finals in viewership ratings, but also became the most-watched soccer event in television history. . . .” Yet the women earn an astonishing 98.6 percent less than their male counterparts, receive less funding, less media coverage, and are forced to play on a tougher surface than the U.S. Men’s team.

The negativity came to a head this month in a video about sports reporters Sarah Spain and Julie DiCaro and the vicious tweets they’ve received. In it, men (who did not know these women and had not previously seen the vitriolic tweets) read them in person to the two professional sportswriters. The fans, who stutter and struggle to read these horrible tweets realize these attacks are #MoreThanMean—they’re harassment.

Do We Do This to Ourselves?

Chances are good that you, too, are outraged at these stories and these tweets. Sadly, women in sports are subject to the same types of disparaging remarks as women in other fields receive.

Yet, if you experience outrage when you hear an obviously sexist remark from a man, why do you say similar things to yourself?

Think you don’t? Consider these examples:

Telling yourself that you’re not the reason for your own success, or that you are the cause of a problem, is a toxic pattern of internalized self-blaming ideas I’ve named girly thoughts. Why name this? So you can identify and distance yourself from this type of pervasive, negative thinking that has you doing to yourself what the tweets in the video are doing to the reporters—shaming and disempowering yourself.

So the next time you

think of Serena and Sarah and Julie exercising their power, and then exercise your own. See what happens within you when you tell yourself, “That’s a girly thought!”—and don’t forget to share your experience with me.

Want to take some public action?