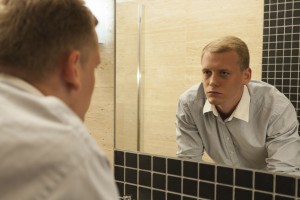 Jonathan is a 45-year-old structural engineer. He has been in recovery for both sex addiction and meth/cocaine addiction for just under a year, initially seeking help after his wife learned about his multiple affairs, trips to strip clubs, drug abuse, and sex with prostitutes. Jonathan is serious about his recovery and saving his marriage. Unfortunately, his office is located in a part of town that forces him to drive through a seedy neighborhood littered with strip clubs, drug dealers, and prostitutes. On his good days, he doesn’t even think about these temptations when he drives past. However, if he and his wife have been arguing, or he’s had a tough day at work, or he simply woke up on the wrong side of the bed, he finds that he can think of nothing else. On two occasions he has “slipped” on his way home from work – once finding himself high on cocaine in a strip club, another time ending up in the back seat of his car with a meth-addicted prostitute. He was truthful with his wife about both slips, and she was grateful for his honesty. However, her patience is wearing thin. Meanwhile, Jonathan can’t understand why he’s had these moments of weakness when he’s working so hard to heal from his addictions and to rebuild relationship trust with his wife.

From an addiction perspective, Jonathan’s slips have occurred primarily because he has failed to recognize the potency and allure of certain “triggers” for his addictions. In other words, he has not acknowledged the thoughts, feelings, and external influences – the people, places, and things – that precipitate his desire to get high and sexually act out. A few of these triggers include fighting with his wife, work-related frustrations, and visual reminders of his active addiction. When Jonathan doesn’t remain aware of, spot, and work to counteract these catalysts for his addictive cycle, or when he is slammed by multiple triggers at once, his ability to make sound, recovery-based choices decreases. This powerlessness is most apparent in the language he uses to describe his slips – “finding himself” in a strip club, “ending up” with a prostitute. That is very different than “choosing” or “making a conscious decision” to do something.

Regrettably, anything that triggers an addict to remember the long-lost pleasure of active addiction is a potential precursor for relapse. This means that almost anything – items both internal and external – can be a trigger toward addiction.

Addicts must also deal with intertwined triggers (triggers that are both external and internal). For instance, if/when a sex and stimulant addict argues with his or her spouse or has a bad day at work (an external trigger) he or she is likely to experience emotional discomfort (an internal trigger), with both triggers causing a desire to act out. And this desire may be exacerbated by visual triggers that remind the addict of his or her addiction (such as driving past strip clubs, prostitutes, and drug dealers).

Interestingly, not all triggers are negative in nature. Sometimes material successes and positive emotions will evoke a desire to celebrate and thus a desire to drink, use drugs, act out sexually, gamble, spend, etc.

For sex addicts, a few of the more common internal triggers are:

For sex addicts, a few of the more common external triggers are:

Both of the above lists could be extended indefinitely. In other words, pretty much anything can be an addiction trigger. Even memories of past traumas can be present-day triggers. For instance, if Jonathan’s boss looks at one of his coworkers crossly, this might remind Jonathan of his occasionally abusive father, dredging up bad memories and creating emotional discomfort – fear, shame, anger, etc. Needless to say, these negative emotions are potential triggers for Jonathan, even though his boss’s present-day expression of annoyance is not directed at him and in fact has nothing whatsoever to do with him.

Unfortunately, triggers cannot easily be avoided. Think about alcoholics driving past billboard ads for beer, scotch, and vodka. Think about drug addicts watching television crime dramas where the “perps” are selling or using drugs. Think about all of the attractive people (i.e., potential sexual partners) that a sex addict sees on a daily basis. Then think about any addict at all dealing with the rollercoaster of life and the emotions it induces. Triggers are everywhere, and there is nothing that addicts can do about that fact beyond learning to recognize them and deal with them in healthy ways – a topic I will address in detail in my next posting to this site.